The company has set up first of its kind of industrial fermentation facilities consisting of 1 million liters capacity fermentation establishment and suitable downstream processing facilities for Calcium Gluconate (bulk drug) production, based on CSIR (RRL, Jammu) process technology. These facilities were inaugurated by Dr. R A Mashelkar, DG - CSIR on 5th May 2004.

Glucono Delta-Lactone is a multifunctional food additive with following applications 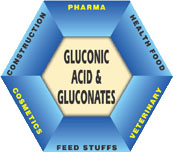 Gluconic acid is an organic compound with a molecular formula of C6H12O7 and condensed structural formula HOCH2 (CHOH)4 COOH. It is one of the 16 stereoisomers of 2, 3, 4, 5, 6-pentahydroxyhexanoic acid commonly known as dextronic acid.

In aqueous solution at neutral pH, gluconic acid forms the Gluconate ion. The salts of gluconic acid are known as "Gluconates". Gluconic acid, gluconate salts, and gluconate esters occur widely in nature as these compounds arise from the oxidation of glucose. Some drugs are injected in the form of gluconates.

Gluconic acid can be obtained by chemical synthesis, on account of its superior selectively; however microbial production is highly preferred. A series of microorganisms under the genus of Aspergillus, Penicillin, Gluconobacter, Pseudomonas, Phytomonas, Achromobacter, Klebsiella, Zymomonas, and Acetobacter have already been used for microbial production of gluconic acid. A yeast-like fungal culture, Aureobasidium pullulans was also known for the production of small amounts of gluconic acid.

For microbial production of gluconic acid, predominantly, Aspergillus niger or Gluconobacter suboxidans are in industrial use. Aspergillus niger is difficult to handle, as it causes clogging and unsuitable for the continuous production. This is mainly due to the drawback that cell growth and gluconic formation would not be possible simultaneously. On the other hand, Gluconobacter has been found to produce a relatively large quantity of keto acids during production. These keto acids complicate the processing and isolation of the pure gluconic acid.

Gluconic acid is a multifunction carbonic acid and it is used extensively in various applications with its physiological and chemical characteristics.

Used as a raw material for the manufacturing of gluconate salts with minerals like Calcium, Sodium, Potassium, and Manganese etc. 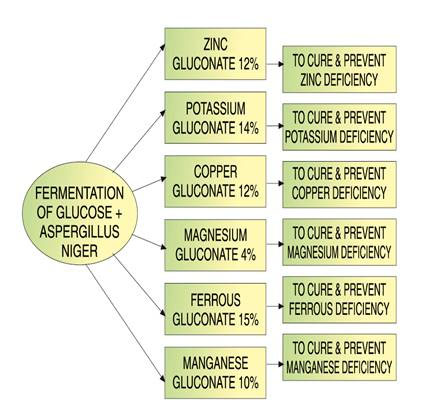 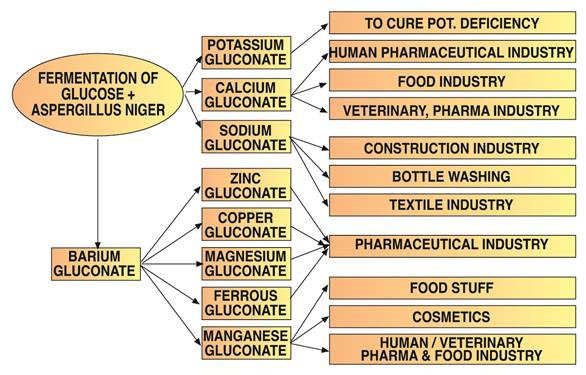 The gluconate anion chelates with Ca2+, Fe2+, Al3+ as well as other metals and forms salts. In 1929, Horace Terhune Herric first developed a process for producing the salt by fermentation. Various gluconate salts with their applications are as follows.

Calcium is an essential element of tissues and blood, which constitutes approximately 10 mg/ 100 mL. The average daily requirement of calcium is 500 mg, however higher amounts are necessary during the periods of growth. Calcium Gluconate has the molecular formula of C12H22CaO14.H2O with 448.40 g/mol of molecular weight.

Potassium Gluconate is administered in all cases of potassium deficiencies or in danger of potassium depletion in conditions like diabetic acidosis, diarrhea, and vomiting etc. Potassium chloride is also used but potassium gluconate is highly preferred because of its slight saline taste.

It is a sodium salt of gluconic acid with a molecular formula of C6H11O7Na. It has a molar mass of 218.14 g/mole. Sodium gluconate has many applications in as below

Manganese gluconate can be readily formulated into tablets for the treatment of manganese deficiency. It is primarily added to vitamins and mineral dietary preparations to supplement the normal intake in the case of inadequate levels. In feed Stuff Manganese Gluconate is added to animals feed to assure adequate manganese ions for balanced diet development.

Manganese gluconate has applications in Pharma, Food, and Feed sectors.

Various other gluconates of Zn, Fe, Quinine also have important pharma applications as below